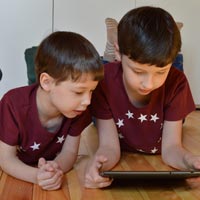 Recent studies show that use of connected screens and devices by children, including under-fives, is growing fast. The pandemic appears to have increased kids’ screen use too, as children have spent more time indoors and less time playing ‘in person’ with friends.

The big question for parents is: is all this screen time healthy for children? In this article, we’ll take a look …

According to Childwise, the leading research experts for children and young people, children are spending more and more time on connected devices. These are devices like mobiles, tablets, smart TVs, virtual assistants like Alexa and so on. Most feature a screen but all can connect to the Internet, to other devices and/or to people via Wi-Fi or data connection.

Here’s what the recent research has to say about children’s use of connected devices:

Most figures in the surveys had increased in the last 12 months, although there were occasional exceptions.

According to findings of the research, half of preschoolers found online content without parental input and 60% of children aged 3 to 4 are more than capable of deciding which apps they wanted to use. 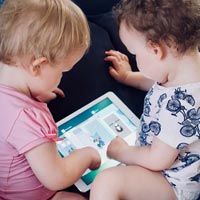 “Parents have always played a huge role in curating what [under-fives] consume and how their time is spent, but toddlers are now confidently navigating digital platforms for themselves, and using touchscreen devices with purpose and determination.” (Childwise)

Is Screen Time All Bad?

It’s generally accepted that too much screen time for children is not healthy for them. There are many reasons for this and we explore a few of the issues below …

“The battle to forge a healthy digital lifestyle is now a very real consideration for parents” (Childwise). 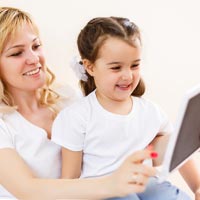 While time spent by children on connected screens and devices is rising, it’s not all bad news. The pandemic has also seen an increase in the time that parents have been spending with children, including on shared screen viewing as well as on other pastimes like baking, crafts and family activities. At the end of the day, it’s all about a healthy balance and, of course, adult supervision to ensure children’s wellbeing at all times.

Indeed, despite the sometimes alarming statistics, parents are in a prime position to influence what their children are exposed to on screens and connected devices. As such, that’s a golden opportunity to encourage content that’s not only stimulating and fun, but also educational. Programmes about nature or science are obvious examples, but there are many others.

When it comes to screen time for under-fives at Little Cedars Nursery, we understand both the benefits and the pitfalls. Technology has a great many benefits when used correctly and indeed is part of the Early Years Foundation Stage (EYFS) curriculum at the nursery. However, for obvious reasons, any time spent online or with electronic screens is stringently monitored and controlled by our childcare professionals. We aim to maximise the positive benefits of technology, while at the same time keeping children as safe as possible. We also, of course, know the importance of physical activities and active play at the setting so, at the end of the day, it’s about getting the balance right.

ou are looking for a high quality nursery or pre-school place for your baby or child in and around Streatham, please do consider Little Cedars Nursery. We’re in Aldrington Road, SW16, so we’re also suitable for those looking for nurseries and pre-schools near to Furzedown, Balham, Tooting, Streatham Common, Streatham Hill and Streatham Park. Please choose a contact option below to get in touch: